Judith left school at 16 to fulfil her dreams as a ‘Top Shelf’ glamour model. However, after winning the prestigious ‘Best New Material’ award at the 1999 Masturbators Anonymous Dinner, a promising career was cut short when it was discovered that she was in fact an aeroplane blonde and the collars and cuffs didn’t match. A distraught Judith closed her legs on the gentleman’s literature industry, renounced her wild ways and joined the St Desdemona’s Sisterhood of Sweetness and Easy Virtue in Southern Italy. After a happy year spent forgetting her past and repenting her sins, Judith’s eye was turned by the local Vespa repair man and she was soon sent home in disgrace when it became apparent that her enlarging belly wasn’t due to the pasta diet. Many years passed as Judith raised her child away from the adult entertainment spotlight until she popped into her local for a Babycham and was blown away by 4 snotty-nosed punks, tearing the roof off (literally, they were selling the lead for scrap metal). Judith knew that it was time to put herself back on the market and made a bee-line for the singer, winning him over with a quick ‘knee trembler’ in the pub garden. The two became inseparable and she began following the band to every gig.  Her early experience in front of the lens was to prove invaluable as she acquired the job of band photographer. She also demonstrated a shrewd head for business and can now be found hawking the band merchandise from a battered suitcase. 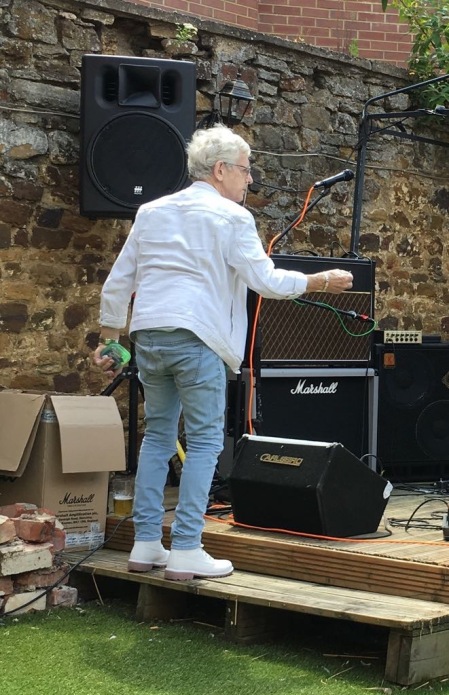 Big Nev drifted through a number of low paid jobs after being kicked out of school at 14 for deflowering the headmaster’s 16 year old daughter. He tried his hand at hospital portering, basket weaving and chimney sweeping before becoming enticed by the bright lights of the music industry. Armed with a utility belt and a roll of gaffer tape, he set out for the bright lights of Liverpool, to become the world’s greatest roadie. His skills got him noticed and he soon found himself working with the likes of Jimi Hendrix, The Who & Lemmy. The 60’s passed by in a haze of drugs, alcohol and venereal diseases, until the work began to dry up, so Nev jumped on a plane to the Big Apple where he established himself as a big cheese in the adult film industry. Some of his career highlights included ‘Is That A 1/4 Inch Jack In Your Pocket Or Are You Pleased To See Me?’, ‘Any Chance Of A Screw, Driver?’ And ‘Where’s My Wristwatch?’ as  Nev continued to enjoy the rock ‘n roll lifestyle. After more than a thousand films and numerous clinic appointments, Nev became disillusioned with the state of the industry, as the advent of 10 minute videos on the internet sounded the death knell for the feature length grumble flick with dialogue and plot. He sold all his cameras and dildos and bought a quiet farm, where he herded cattle for many years until his bovine beauties were disturbed by the sound of an obnoxious band playing in the next field. Big Nev noticed that the band didn’t have the first clue how to tune their instruments and offered his services for the price of a mobility scooter. He can now be found uttering the words, ‘You’re nowhere near as good as the bands I worked with before,’ from the side of the stage whilst weeding out all the red smarties in the band rider.